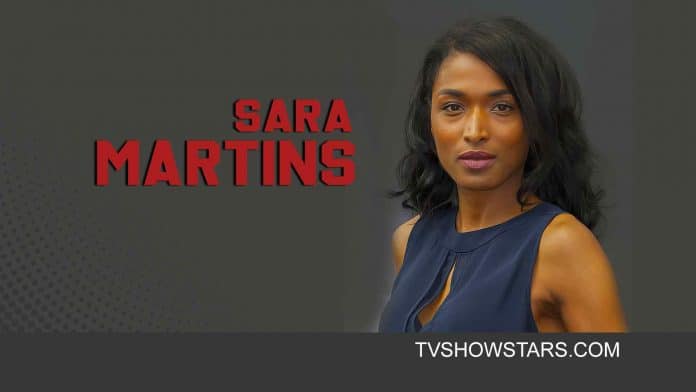 Sara Martins is a Portuguese actress who is famous not only in her home country but is in France as well. Other than that, the Portuguese-born Sara is also a descendant of Cape Verdean.

Besides, the actress became famous after her appearance in the British-French crime comedy-drama Death in Paradise. The detective has been a fan favorite ever since. So, today, we are going undercover and share the details that we have successfully gathered. Like who is she dating? Is she single? And much more to spike your interest.

But before, here are some interesting facts about the actress herself.

The beautiful actress was born on August 19, 1977, in Faro, Portugal. As mentioned above, she is the descendant of Cape Verdean and holds the citizenship of Portugal. Also, Sara moved with her family to France when she was just three years old. However, there is no information regarding her parents and whereabouts.

Talking about her education, Sara was interested in dancing from an early age. After moving to France, the young Sara trained in ballet and became the first person of African ethnicity to join the Lyon Opera, a well-reputed ballet company in France.

Sara then graduated high school with a theatre option and later received DEUG in law from Ecole de theatre Les Enfants Terribles in Paris. Moreover, she also completed an acting degree from the French National Academy of Dramatic Arts.

Likewise, the talented actress is fluent in Portuguese, French, and English as of now.

Age and Measurements- How Old Is Sara Martins?

The beautiful actress is enjoying her life as a 42-year-old. She has a tall stature of 5 feet 5 inches(165 cm). However, her weight and other exact measurements are unknown.

But there is no hiding her natural beauty, which compliments her humble personality. Sara has brown, sunkissed skin that gives off a radiant aura. Also, her expressive brown eyes and curly brown hair adds more to her beauty.

Talking about her acting career, Sara has been interested in acting from an early age, which also led her to learn it. Before appearing on screen, the actress was hired by Roger Planchon for a local production of Le Radeau de la Meduse at the Theatre National Populaire in Villeurbanne.

Sara started her career as an actress in the 2001 television series Police District. She also appeared in other shows like Pigalle, la Nuit as Fleur, and more.

But it was her role in Death in Paradise that brought her to the media’s attention. The crime comedy-drama, which aired on October 25, 2011, was the debut for Martins in terms of comedy and British television.

Moreover, the young actress portrayed the character of Camille Bordey, a detective sergeant in the fictional Caribbean island of Saint-Marie. She starred alongside stars like Ben Miller and Kris Marshall.

Sara was dedicated to her role to such an extent that in the series 1st episode, she tore her Achilles tendon doing some stunt. During the filming, Martins also said her mannerisms are distinctly French.

However, in season four, Martin was written off the show as her character moved to Paris.

During her departure from the show, Sara said, and we quote,

” I’ve loved everything about the show. But the only way to grow in life is to take risks, even if it means losing something you love or leaving a place that’s comfortable. “

It is a well-known fact that humans tend to know more about others. And as assumed, many people were curious about Sara’s personal life. Sadly, Sara has not shared much about her own experience as we want her to.

However, despite the lack of information, we know that the 42-year-old actress is single. Not to mention, she has is not married, and it seems the Portuguese beauty is solely focused on her career at the moment.

Since there have been no rumors of her dating anyone, we can safely assume that Sara is single and not married. Today, the actress seems more focused on her career than being involved in a dating scandal.

The Portuguese actress has mostly been the first choice of French television series, so it is safe to assume that she is high in demand. Throughout her career, Martins has garnered not only fans but also a hefty sum.

Despite lacking the exact figures, it is estimated that Martin’s net worth is somewhere around $600,000. The number is pretty impressive in itself. Thanks to her successful acting career, Martins has earned a handsome salary and income under her name.

Also, there is no information on advertisements and commercials. However, the actress is sure to be living a satisfying and blissful life.